Karine Roche graduated from spatial design from the college of applied arts and crafts Olivier de Serres in Paris in 1999.

In UAE, she has exhibited at the Sharjah Art Museum in January and August 2014. in Abu Dhabi with the institut Francais in 2013 and in 2011 at the National theater. 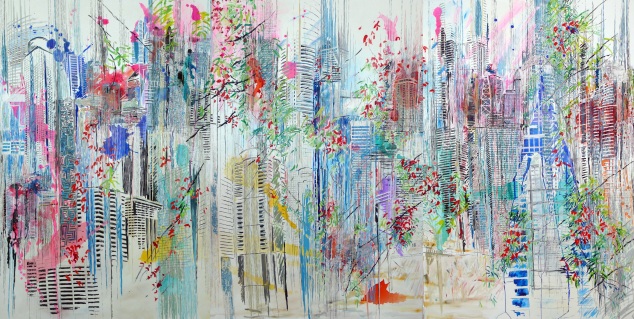 Her artworks are represented by Art Sawa gallery (Dubai) with a first solo exhibition in 2011 Prismatic City and a second one in DIFC in 2013, Chromatic Landscape. she teaches painting in Adach (Abu Dhabi authorities for culture and heritage).

Since 2004, her work is represented by Catherine et André Hug gallery in Paris and she is working with the Unesco’s editions in postcards creation. Since 2008, she also exhibits at Suty Gallery near Paris. In 2009, she has participated in Munich “Kunst im Karre” with a personal exhibition.
In 2010, Alice Mogabgab Gallery in Beirut has presented her work during a collective exhibition. Karine Roche participates in various contemporary art fair such as Art Paris, Star’t Strasbourg, Lille Art Fair, Art Elysées and Slick.
Her paintings are part of municipalities’ collections of Vitry-sur-Seine and Strasbourg in France. Her artworks are also part of the collection of the Museum Lake in Hangzhou, China and the Colas Foundation in France. She has been awarded in 2003 by receiving the painting prize of the town of Vitry-sur-Seine and awarded in 2005 by the Colas Foundation. 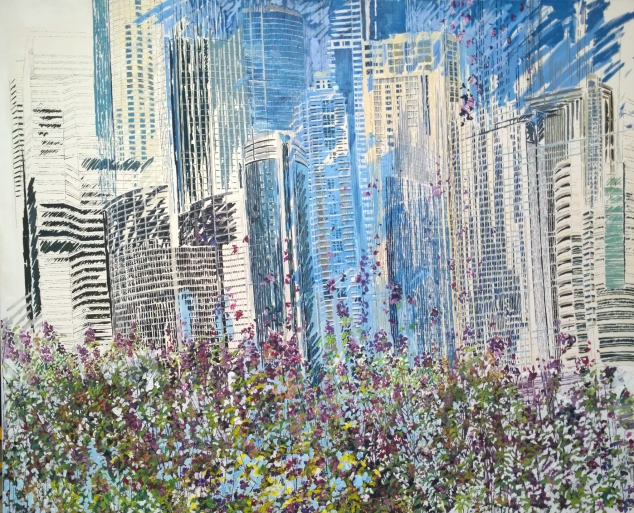 The nature and the city, vegetation and architecture, flora and fauna urban are source of inspiration. These themes serve as a pretext to experiment forms of graphic network and colorful harmonies in human constructions associated with organic forms of plant or processing a simple vegetal view into a jungle fantasy. The choice of a single theme allow to forget about the subject in order to focus only on the painting itself. We are coming from the nature and so is our habitat. City and architecture are the nature, there is no opposition…

City lines and those of the vegetal world are multiples. Their combinations are infinites. Labyrinthine landscapes and urban structures are representing a globalized city. Before being a final image,  the canvas is an abstract thought where forms are only lines, materials and colors. Doors and windows are white squares on a blue background and the canvas does not express a clear idea but more of an impression: The city, cities, noise, people behind the colors, flows and networks, accumulation of activities that is giving stun sensations. Lines are crossing to end up lost in a ghost horizon. Perspectives lines are false and buildings incomplete, the city is an expanding universe going beyond the framework.